We are back to Regular Hours:

(No reviews yet) Write a Review 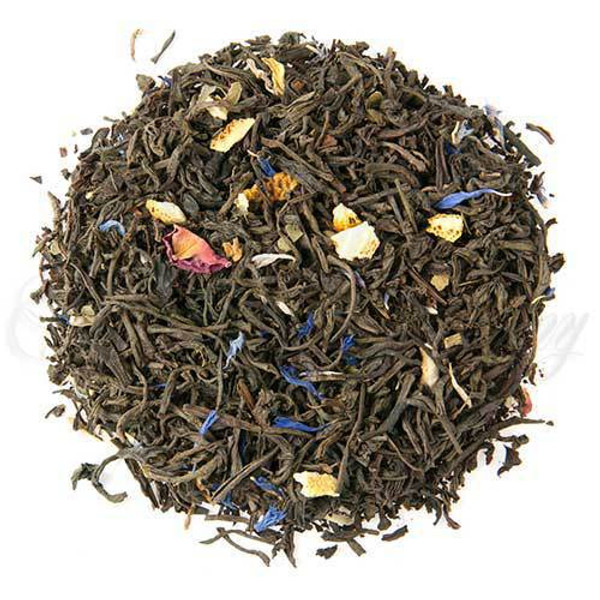 Luxury Ingredients: Black tea, Orange pieces, Cornflower + Rose petals, Lime leaves, Natural flavors. Information: The original Earl Grey tea was made for one Charles (The Second Earl) Grey, a British diplomat to China who also served as Prime Minister of Britain from 1830 - 1834. Charles Grey was given the recipe for the tea by a loyal Mandarin Chinese friend who he had helped him out during a time of need. Less famous perhaps, but no less delicious, is the tea that goes by the name Baroness Grey.

And what exactly is a Baroness? Well, the short answer is the wife of a Baron. The longer answer is the wife of a member of the landowning nobility in old England. As with all noble titles, the term Baron was conferred on people by the reigning King or Queen. Over the centuries many women have held the title of Baroness Grey but we've blended this tea in honor of one woman in particular. British legend has it that this Baroness of Grey, who lived sometime in the 16th or 17th century, was married to a man who was a Ship's Captain in the Royal Navy. As the story goes, his ship never returned from a trading voyage to China. Refusing to believe that her husband would never return the Baroness would walk to the port lands every morning to greet each ship hoping for news of her husband. Sadly, she continued this practice until the day she died.

In honor of the loyal Baroness Grey, we blended this tea with the traditional bergamot and the addition of lemon to represent the bitter tears shed over her beloved. The dried lemon peels add an additional tartness to the citrus character of the tea making it a fantastic alternative to traditional Earl Grey.

Hot tea brewing method: Bring freshly drawn cold water to a rolling boil. Place 1 teaspoon of tea for each cup into the teapot. Pour the boiling water into the teapot. Cover and let steep for 3-7 minutes according to taste (the longer the steeping time the stronger the tea). Even though milk and a dash of sugar help enhance the flavor character on this tea, it is perfectly acceptable to consume this tea straight-up

Iced tea brewing method: (to make 1 liter/quart): Place 6 teaspoons of tea into a teapot or heat resistant pitcher. Pour 1 1/4 cups of freshly boiled water over the tea. Steep for 5 minutes. Quarter fill a serving pitcher with cold water. Pour the tea into your serving pitcher straining the leaves. Add ice and top-up the pitcher with cold water. Garnish and sweeten to taste. [A rule of thumb when preparing fresh brewed iced tea is to double the strength of hot tea since it will be poured over ice and diluted with cold water]. Please note that this tea may tend to go cloudy or milky when poured over ice; a perfectly normal characteristic of some high quality black teas and nothing to worry about!

Note: Baroness Grey might be called Lady Grey except that: [There are different varieties of a tea known as Lady Grey the two most common kinds (Cornflower Lady Grey and Citrus Lady Grey), which combine Earl Grey tea with cornflower and Seville oranges, respectively. "Lady Grey" is a trademark of Twinings.] from Wikipedia.

(No reviews yet) Write a Review

If You Have Credit Card Difficulty Try to ===> Enter only 5-digit zipcodes, in your billing address, no spaces or dash.